We had the honour of asking Nancy Knutsen from ASCAP some questions about how young composers can make their entry into the film and TV industry, especially in the US.

In March during the 30th Annual ASCAP Film & Television Music Awards she was specially honoured for her work at ASCAP since 1988 by Paul Williams as well as John Williams. In their laudatory speeches Paul Williams stressed that “because of Nancy Knutsen we will always remember that the C in ASCAP stands for ‘Composers'” while John Williams calls her his “favourite little Ewok” and that “fortunately unlike diamonds the quality of people isn’t measured by their size – and in Nancy’s case the quality component is huge.”

So you can tell that we were really excited when she agreed to answer some of our questions which were sent to us by different composers from all over the world. The big topic: How can young composers make their first steps into the industry? In an article about the composer talk at last year’s Krakow Film Music Festival we had focussed on this already summing up what Hans Zimmer, Johan Söderqvist, Garry Schyman, Patrick Doyle, Elliot Goldenthal, Dario Marianelli had to say about it. Now we were curious about Nancy’s perspective on the topic.

Back at the Krakow Film Music Festival last autumn she already said that her best advice for up and coming composers was that “certainly in Hollywood but I think everywhere it’s relationship driven. You have to get outside of your studio and have to do things other than write music and connect yourself with people: If you’re a great guitar player but not a good keyboardist go make friends with the best keyboardist in town. You have to surround yourself with people that can add to what you already do. It’s a collaborative process and it’s relationship driven.”

Now when we asked if she had anything to add to it she mentioned that “in addition to having musical talent, composers must learn how to market themselves and need to develop social skills to help them enter the world of the music business.” To support composers in doing so, Nancy established the annual Film & Television Scoring Workshop in Los Angeles 27 years ago. The competition to attend it is just as immense as in the industry itself: Every year only 12 out of over 300 applicants are accepted. Since it’s a given that all of the selected composers are already talented, the workshop strives to turn young composers into professionals. Composers learn how to behave in meetings with directors and how to market themselves. In addition to the Los Angeles workshop, ASCAP also produces two annual Film Scoring Workshops in New York, one in conjunction with New York University, and the other with Columbia University. Both are run by Sue Devine, ASCAP’s Senior Director of Film and Television Music for the East Coast.

Since it’s a given that all of the selected composers are already talented, the workshops strive to turn young composers into professionals. Composers learn how to behave in meetings with directors and how to market themselves. More information about ASCAP’s Film Scoring Workshops and how to apply is available on ASCAP’s official website, here, as well as in an extensive interview with Richard Bellis, Matthew Margeson, Michael Bearden and Joe Trapanese (The Huffington Post).

Talking about how to get your first jobs in the US again it is primarily based on relationships and personal contacts, as Nancy told us:

For composers who are not in Los Angeles (or New York), it is obviously more difficult to make introductions to agents, studio music departments and established composers in LA, but I know of many composers from Europe and Australia who have made the commitment to travel to Los Angeles to meet with people who can help them with their careers.

Speaking about careers many composers had sent us questions about how to get in contact with already established composers and to become an assistant at e.g. Remote Control. Her answer therefore was pretty similar while mentioning the success story of Marc Streitenfeld, whose score for Gil Kenan’s “Poltergeist” has just been released:

In order to become introduced to established composers at studios such as Remote Control, a young composer must make the commitment to travel to Los Angeles. The film and television department staff at ASCAP has strong relationships with everyone at all of the major studios, music libraries and production companies, and can hopefully help to introduce composers to people at these studios and production companies. A great success story is German composer Marc Steitenfeld, who worked as an unpaid intern at Remote Control, doing everything from making coffee to running errands, which finally resulted in composing scores for director Ridley Scott, based on Marc’s work with Hans Zimmer.

“Score a film which gets attention in the US”

Some other questions that were sent to us covered the dilemma that major agents or publishing companies don’t allow unsolicited submissions of music for consideration or representation. So Nancy told us what composers can do about it:

The typical response from an agent about an aspiring composer is “when he is ready to be represented by us, we will already know about him” (or her).  Once again, the ASCAP staff can help with introductions, but a young composer will most likely not be able to secure an agent until he or she has scored a film which gets attention in the US.

“Composers need to do their homework.”

In conclusion Nancy said that to get into pitches and hear about new projects “composers need to do their homework.” She stressed on the fact that a lot of information about upcoming projects and films in production are online today. Additionally trade journals like Variety and The Hollywood Reporter can be a good source of information as they have ongoing lists of both upcoming films and television series. Then she recommended attending film music conferences and festivals “such as those in Krakow, Ghent, and Tenerife” as they are “a wonderful opportunity to meet composers and music industry professionals from throughout the world.” 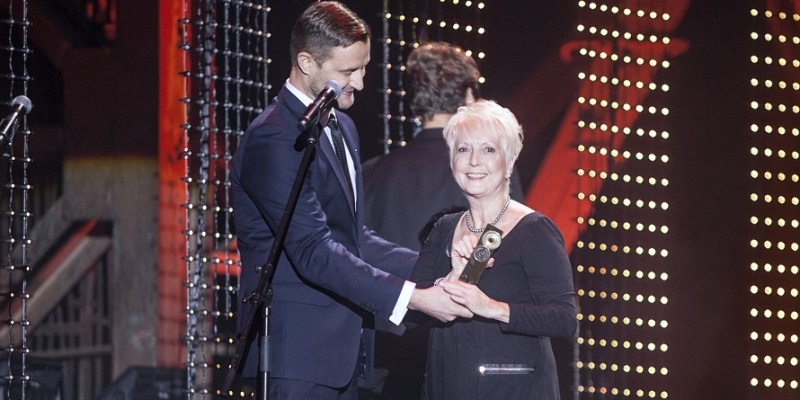 About Nancy Knutsen:
Nancy Knutsen, who works as a Special Consultant in the field of Film & TV at ASCAP has a remarkable job history behind her which the Krakow Film Music Festival summed up perfectly last year when Nancy Knutsen received the Film Music Festival’s first ever Ambassador Award: “For years she was the Senior Vice President for Film and Television Repertoire at ASCAP, the producer of the Association’s annual Film and Television Music Awards; a consultant to the board of the Young Musicians Foundation; a member of the National Academy of Television Arts and Sciences, Women in Film and the National Academy of Recording Arts and Sciences; as well as the founder of the Advisory Committee of the World Soundtrack Academy. Before starting work at ASCAP, Nancy was assistant to composer John Williams and manager of the Boston Pops and Boston Symphony Orchestra. She has worked with the greatest composers and conductors of our time, among others Aaron Copland, Leonard Bernstein, Seiji Ozawa, André Previn and Henry Mancini.”
ShareTweet