BEHIND THE AUDIO
Columns

What is Perfect Pitch anyway?

Perfect pitch is a term used by non-musicians to mean “pretty good ability to stay in tune.” As in, “You should hear my daughter sing – she has perfect pitch!” Meaning she gets the notes right. Sometimes.

However, when musicians use the term it refers to the ability to correctly identify a specific pitch – or “hear” it in your head – without an external reference. Academics call this absolute pitch, or AP. This means if someone has just walked in the door and you play a note on the piano that they can’t see, they can tell you which note it is. Or, when a car honks its horn they can tell you what notes make up the sound.

This is distinctly different from relative pitch, whereby given a reference pitch you can determine what any other pitch is after that. Which is why I said “just walked in the door” in the previous example. Most professional musicians have very good pitch memory – if you play a piece in D minor, and ask them to sing a “d” five minutes later, they generally can. But a half-hour later might be harder, especially if there has been other music playing in the interim. By contrast, people with AP can still sing you a “d” even after a brass band has just marched through the living room playing in another key and leaving mud all over the carpet.

Where does Perfect Pitch come from?

Most people acquire absolute pitch when they are quite young – 3 to 6 is typical. Many do not remember acquiring it. While there may be a genetic component to it, research by Dr. Diana Deutsch at UC San Diego indicates that it is language dependent. Those who grow up learning tonal languages like Chinese are far more likely to exhibit perfect pitch than those who grow up with non-tonal languages like Japanese – or English. Exact numbers are hard to come by, but AP is quite rare in the West – one in thousands, perhaps. However, musicians in both East and West demonstrate the ability far more often than non-musicians. Sort of like mental illness and artistry: You don’t have to be crazy to be a great composer – but it helps.

Despite all those ads in the Musician’s Union paper, there is no evidence that any training as an adult can instill AP, although it can absolutely improve relative pitch. And, for reasons not fully understood, many musicians with AP find it becomes less accurate with advanced age, typically going sharp; when something is played in C they might hear it as C#.

I do not have AP. I do have a heightened ability to recognize timbre, however. So when I tune my violin without a pitch reference, I can usually get my A-string within 5 cents (hundredths of a semi-tone) without a pitch reference simply by sound quality alone. I also have noticed that when I dream I’m playing a piece of music and it’s in a specific key, if, immediately after waking, I check what I “heard” against a piano, I am usually right, and almost always no more than a half-step away. This is probably a form of pitch memory, which we nearly all have to some degree. Obviously, most people have enough pitch memory to sing a melody recognizably, except maybe your drunken uncle Bob at Thanksgiving.

Legendary youth orchestra conductor Marv Rabin once told me he got his kid musicians to learn what an A was by having them sing it in unison before the oboist played it. Eventually, they learned how an “a” felt in their throat and could tune fairly accurately on their own. Then again, Marv had AP.

Not All Keys Are Created Equal 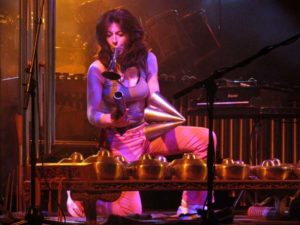 Synthaesthesia is the phenomenon of experiencing something with one sense and perceiving it in another. People with AP often think individual notes have corresponding colors. Composer John Musto, who has AP, told me this is the case with him – this is particularly strange because John is red-green color-blind. (He also paints impressively. And world-famous percussionist Evelyn Glennie has AP – and is deaf. These people can be really annoying…)

But even if you don’t have AP, not all notes – and, particularly, not all keys – are the same. For example, the lower you go in pitch, the more “rub” two pitches will have because of clashing overtone series. So, a major third played on the D and F# below middle C has great clarity, whereas the same interval a fourth below (A and C#) will be muddier. This means that a piece that sounds great in one key might not work as well in another. Piano virtuoso Michael Wolff – who does not have AP – told me he was working on the Barber Adagio and couldn’t figure out why it sounded wrong until he realized the transcription he had was in A minor instead of the original Bb minor. Individual instruments will also affect this as well – maybe why Jimi Hendrix liked to tune his guitar down a half-step.

What’s In A Note?

To make things more confusing, the definition of an A or Bb is slippery as well. For about 150 years, the U.S. has recognized the A above middle C to be 440 vibrations per second. But this is entirely arbitrary. In Bach’s time pitch was determined by whatever the local church organ sounded like, which varied widely. It is generally accepted that an A in Mozart’s time would sound like a contemporary G#.

In recent decades, many orchestras have started tuning sharper – some as high as 446 or more, because the instruments have greater penetration power. Which, in turn, drives singers batty as the human body hasn’t changed to accommodate these new higher pitches. Further, western music has used a system called equal temperament for about 250 years, in which each successive note on a chromatic scale is the same ratio in frequency to the next. This makes changing keys a lot easier, but flies in the face of thousands of years of musical tradition based on the overtone series. But that’s the subject of another post.

Posted by Michael A. Levine

What Is Perfect Pitch Anyway? ‹ Michael A. Levine
Share On TwitterShare On Google

[…] Michael’s article on perfect pitch was featured on the Soundtracks and Trailer Music website. You can read the full column here. […]