Many of you are probably excited about Batman v Superman: Dawn of Justice hitting the big screen on March 24 this year. While expectations still vary, it’s definitely safe to say that we can expect a visual feast from director Zack Snyder as well as a massive score from Hans Zimmer and Junkie XL.

WaterTower Music has now released a first audio glimpse of the score which is a 90 second snipped from the track Their War Here. The full soundtrack will be released on CD as well as a Deluxe 2 CD Set, a Limited Edition 3 Disc Vinyl Deluxe and on all major digital platforms on March 18.

In the official release note where you find more info about the soundtrack, WaterTower Music quotes director Zack Snyder as follows:

Hans and Tom (Junkie XL) created an incredibly compelling and interesting new musical world for Batman, while continuing to expand on the amazing world and themes Hans had previously created for Superman. By aligning their vision with my perspective and seeing the characters anew through the lens of the film they were able to support the visual aspects of movie in a way that elevates the film to another level. In so many ways, they become the final texture, the final note in the process of creating the world.

Here’s the tracklist for you: 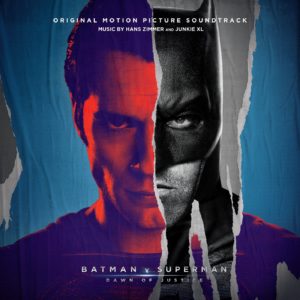 Hans Zimmer’s and Junkie XL’s Soundtrack for Batman v Superman: Dawn of Justice will be released on March 18 by WaterTower Music.

** On deluxe versions only

You can preorder Hans Zimmer’s and Junkie XL’s soundtrack for ‘Batman V Superman: Dawn of Justice’ via iTunes, at Amazon, and on Vinyl. You can watch a recently released movie clip below: