Celldweller and Atlas Plug recently teamed up to score Killer Instinct: Season 3.  A good reason to let the artist behind Atlas Plug, MTV VMA nominated composer Tom Salta, explain to you how creating Atlas Plug helped him to re-invent his career in the early 2000s. You can watch how the music for “Rash”, one of the members of the Battletoads, was created in Killer Instinct season 3; followed by the story about how Tom went from making records for artists like Cher and Whitney Houston to scoring video games like Need for Speed Underground 2, Still Life or Halo: Spartan Assault – all thanks to Atlas Plug!

There are many reasons why an artist would want to re-invent his or her career. While personal matters tend to rank high on that list, it can also be because an industry is shifting or another one is emerging. At the turn of the millennium, the video game industry experienced many changes. Not only did graphics improve on an almost daily basis (because game consoles became faster and production budgets grew exponentially), a new kind of storytelling found its way into the industry and, with it, music also changed. Suddenly, scores for games were recorded with live orchestras and more and more artists began to make a living from creating music and sounds for video games.

Throughout the 90’s Tom Salta worked with some of the biggest pop artists out there: Cher, Whitney Houston, Peter Gabriel, Mary J. Blige and Sinead O’Connor. Everyone who was anyone turned to Tom to make their songs shine. In 2001 Tom “got the bug to make a change” because he felt that the music industry was not going in a direction that he liked. 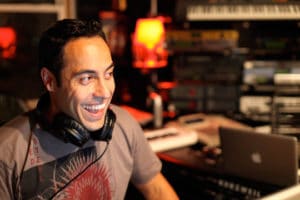 Halo: Combat Evolved was released in 2001, Tom describes the moment when “the clouds opened and the light bulb went on.” The experience of playing Halo CE at that time was an “epiphany” for Tom, and was also the moment when he realized what he was meant to be doing instead of just making records. It had become obvious to him that game scores combined the two things that he held dear: His lifetime love of playing video games and creating music.

But how do you take a successful career, spin it off and make a name for yourself in an entirely new industry?

In the beginning, Tom was confident that his credentials in the music industry would start him off on the right foot to get noticed in the video game industry. So in 2002 he visited the Electronic Entertainment Expo (E3) in an effort to make his first contacts in the gaming industry. Unfortunately, most of the people he met really did not care about “newbie, wannabe composers.” But he perceived something there that would help him a lot in the following years, something that would open up all the right opportunities:

I got the sense that artists like Crystal Method, Moby or The Chemical Brothers were considered cool by game industry folks. These were the kind of artists that video game companies would license music from. Everybody respected them. I thought, “Well, then I should probably portray myself as an artist!“

And that’s how Atlas Plug was born: “Atlas” is Salta backwards, and “plug” is the opposite of unplugged (typically how acoustic music is described).

Atlas Plug was the moniker Tom created for himself as he set out to produce an entire artist album of music that was specifically designed to be licensed in video games, tv and film; which in turn, could help him get noticed in the gaming industry – but it was also intended to differentiate his artist persona from his composer persona:

The reason why I came up with Atlas Plug was because no one knew who Tom Salta was in the game industry. I knew that the music I would be doing for Atlas Plug wouldn’t represent the full scope of musical styles I wanted do as a composer. And since the industry loves to typecast, I felt it was important to split my identity into an artist and composer side. Atlas Plug was going to have a very specific sound… electronic and aggressive. I wanted to use that as the door in, then once I got some credibility, I’d “pull off the mask“ and focus on developing my career as a composer.

It was a crazy and bold plan – but it worked…

…Like a charm: In 2003 Tom started recording his debut album, 2 Days or Die, and partnered with a publisher, Position Music. Position had ties with Microsoft who heard parts of the album before it was even finished (looking back, a very interesting coincidence considering Tom’s recent involvement in the Halo franchise). They asked to license four songs from the album for RalliSport Challenge 2. To be precise: Not even the songs themselves were finished at that point. Tom was over the moon, and used the positive energy to finish up the album as soon as possible in 2003.

Listen to a preview of ‘Around the World’, the followup single to Atlas Plug’s debut album, ‘2 Days or Die’:

In the first year alone, tracks from the album were licensed in games like Project Gotham Racing, Crackdown, Fast and the Furious and many others. Shortly after, Tom suddenly found himself being approached by EA to compose original music in the same style as Atlas Plug for Need for Speed Underground 2 (Oh, I loved that game!).

And all of a sudden, there it was: The opportunity to finally do original music for a game, and not just any game but a AAA title for a prestigious series.

Listen to Tom Salta’s ‘Take to the Top’ from the Need for Speed Underground 2 Soundtrack:

Back to where it all started: Entering the Halo Universe

Tom then went on to score games like the Tom Clancy’s Ghost Recon Advanced Warfighter and HAWX series, Prince of Persia, the Red Steel series and many others. Exactly ten years after his aforementioned epiphany after coming across Halo: Combat Evolved, in 2011 Tom was then offered the opportunity to become a member of the team working on the re-release of this very same title and to redo the whole score of the first-ever Halo game. His involvement then led to him scoring the two top-down-shooter mobile games Halo: Spartan Assault and its sequel Halo: Spartan Strike, before he became part of the team redoing the score for the Halo 2 Anniversary Edition which was part of Halo: The Master Chief Collection.This was followed up by him scoring the animated series Halo: The Fall of Reach last year and creating Halo’s first ever pop song, Take this Life.

Listen to Tom Salta’s ‘Take this Life’ from the ‘Halo: The Fall of Reach’ soundtrack:

Looking back, it is clear to Tom how important the creation of Atlas Plug was for his career as a game composer – and how omnipresent his artist persona still is:

I think Atlas Plug is largely responsible for where I am today. I feel horrible that I haven’t done a sophomore record after 12 years, but who knows, that might change very soon given the reemergence of Atlas Plug on Killer Instinct Season 3. People still remember the original album and listen to it. In fact, I’m currently working on yet another title where developer wanted me to go back to the style of my music on the Atlas Plug record – which is from 2003! That’s a long shelf life for an electronic record… I’m really happy that it’s still relevant.

Over the course of my career, it seems that every game I did pushed the threshold further, it made me stretch out my wings. For many years, each title I scored had completely different musical style requirements, which got me further and further away from my comfort zone. And that’s good… that’s where the most growth happens for anyone.

When I asked Tom about how not being a classically trained affected his style, he mentioned how he often sees it as an advantage, allowing him the freedom to think more outside the box than traditionally trained composers. He also mentioned that his many years of experience in the music industry afforded him other advantages. “When I was breaking into games, I already had 15 years of experience and knew the entire music pipeline very well… everything from inception to mix. It afforded me the ability to go beyond where most game composers could go at the time, which helped me stand out and get noticed, quickly establishing a name for myself.“

Tom told me that his entire approach is often different to classically trained composers:

Because I don’t have the typical background of most composers, I often approach music differently and I think that helps gives me a more unique sound. I don’t generally follow “the rules”, I go with what sounds good. I’m closer to the mindset of composers like Hans Zimmer and Danny Elfman who are very experienced producers. Of course they are amazing composers but they didn’t have a traditional path into composing. Hans Zimmer, especially, is an amazing all around producer and visionary and I resonate with that.

When I’m dealing with an orchestra, the most important thing is making the music great. When it comes to figuring out how it’s going to be properly spread across an orchestral pallet for live recording, that’s where I will bring in an orchestrator. But I’m still very hands on throughout the process.  My ideas are usually very developed by the time I’m preparing for a live recording session.

On a final note: About collaboration, geographical independence and business thinking

Generally speaking, Tom stressed on the importance of having a good team around you:

When you get into working on bigger projects and in particular TV and Film, you can’t do it without a team; between all the constant edits, conforming to picture and deadlines, you always need a team… that’s a given.

An interesting sidenote is that Tom never moved geographically to one of the main hotspots of the game and film composers, California. Living in Connecticut with his family and always putting them first, “99% of the time” he tends not to be in the same locale as the clients he’s working with. He pointed out that this is much more common in the gaming industry than in the film industry… so for all you composers out there thinking about where to live and where to make a career, you might want to keep these things in mind.

With technology these days, it doesn’t matter as much as it used to where you live. In this industry it’s critical to network – regardless of where you live. You really need to pay attention to where all the networking opportunities are. There are plenty of conferences and events where all the usual suspects are together in one place. I make sure to pick and choose where I’m going to be at certain times of the year, so I can network and to get some face-time with my friends and colleagues. That’s really critical. You don’t need to do it every week but it’s very important to do it on a routine basis.

Also, it is important for any creative professional to understand: If you want to make a living as a creative professional, then the “business” aspect is key. Your talent and your music are of course very important; but unless you treat it as a business and really market yourself properly, you are not going to be successful. Or, at the very least, not as successful as you could be.

You can read more about Tom Salta in our recents articles about his creation of Halo’s first ever pop song Take This Life as well our article about his score for ‘Halo: The Fall of Reach‘. More info about Tom you find on Facebook and Twitter as well as on his website.