Out today: Mark Isham’s score for ‘The Accountant’ based on incorporated mathematical equations

Oscar nominated and Grammy winning composer Mark Isham has teamed up with his frequent collaborator, director Gavin O’Connor, to create a score that explores a world of duality and intrigue for the upcoming action thriller ‘The Accountant‘, starring Ben Affleck, Anna Kendrick, and J.K. Simmons. It is the fourth film collaboration between Gavin O’Connor and Mark Isham, following Miracle, Pride and Glory and Warrior. Opening in theatres on October 14, 2016, ‘The Accountant’ is distributed by Warner Brothers. The score album will be available today via Watertower Music and Amazon.

About the score for ‘The Accountant’ by Mark Isham

For the film, Mark Isham created a hybrid score, which includes a 78-piece orchestra, choir, solo cello as well as 27 feet of Steinways (three pianos). Mark Isham explained that writing the score was a massive undertaking, but the challenge was necessary to tell the story. Tapping into his diverse musical talents, he provides a score that traverses between the structured world of accounting and the danger of the central character’s dual life.

“It is the most diverse score I have ever done, but it holds together through thematic unity — the score is based on mathematical equations and patterns,” Mark Isham states. “Despite the lush orchestration and massive amounts of customized electronica, the music is not overly dramatic. The main character of ‘The Accountant’ is a mathematical prodigy, and lives in the world of numbers and numeric patterns. Therefore, I wanted the music to reflect that. Part of the score was created using a series of simple patterns with enough randomness to create texture and nuance. As an example, two notes out of every three would be played, then 5 out of 7 etc. all juxtaposed together, then randomized with competing tempos!” 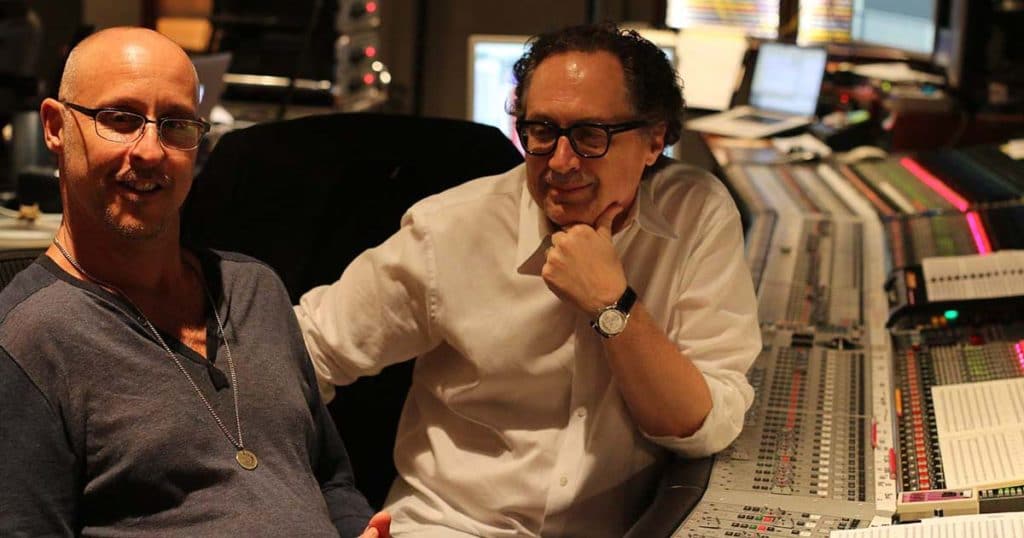 Mark Isham and Gavin O’Connor working on the score for ‘The Accountant’.

I really have enjoyed listening to the score several times this week. With a rather atmospheric yet tension building beginning, the score takes off with the cues Rice Farm and Specialized Training. From there on it includes many fine action moments that constantly grab your attention as they often appear quite unexpectedly within the cues and also because the score includes many tranquil moments.

My favourite piece is definitely The Trial of Solomon Grundy. The steady, very effective progression reminds of iconic pieces like Journey to the Line [consider reading Michael A. Levine’s column on why it’s such a memorable piece]. I really can’t wait to hear it to picture as it creates a terrific emotional arc together with the almost 12 minutes long(!) piece The End of Solomon Grundy and the three cues in between.

Also, singer-songwriter Sean Rowe‘s concluding song Leave Something Behind seems to fit the movie’s mood very well with its thoughtful lyrics he originally wrote inspired by his son. You can watch his live performance of the song here and the official music video below:

Sean Rowe – "To Leave Something Behind"

You can listen to the full score below via Spotify:

About ‘The Accountant’ starring Ben Affleck and Anna Kendrick

‘The Accountant’ follows Christian Wolff (Ben Affleck), a math savant with more affinity for numbers than people. Behind the cover of a small-town CPA office, he works as a freelance accountant for some of the world’s most dangerous criminal organizations. With the Treasury Department’s Crime Enforcement Division, run by Ray King (J.K. Simmons), starting to close in, Christian takes on a legitimate client: a state-of-the-art robotics company where an accounting clerk (Anna Kendrick) has discovered a discrepancy involving millions of dollars.

O’Connor directed the film from a screenplay by Bill Dubuque (“The Judge”). The film was produced by Mark Williams and Lynette Howell Taylor, with O’Connor, Jamie Patricof and Marty Ewing serving as executive producers. Warner Bros. Pictures presents an Electric City Entertainment/Zero Gravity Management Production, a Gavin O’Connor Film, “The Accountant.” The film will be distributed by Warner Bros. Pictures, a Warner Bros. Entertainment Company.  It has been rated R for strong violence and language throughout.

Mark Isham has created critically acclaimed scores for over 100 films, including Crash, 42, Nell, and A River Runs Through It, for which he received a Best Original Score Oscar nomination. In 2013, Mark Isham was recognized with the Distinguished Film Composer Award at the inaugural Middleburg Film Festival along with a concert by the Shenandoah Conservatory Symphony Orchestra of his memorable scores. His self-titled album, Mark Isham, earned him a Grammy Award. Mark Isham’s accolades also include an Emmy award, a Golden Globe nomination and the Henry Mancini award for Career Achievement from ASCAP.

Mark Isham currently scores John Ridley’s critically acclaimed event series American Crime and the Emmy-nominated series Once Upon a Time, both for ABC. Upcoming film projects include Christopher Jenkins’ Duck Duck Goose as well as an adaptation of Lauren Kate’s #1 New York Times bestseller Fallen. You can find out more about Mark Isham on his official website.

Trailer info: The second Official Trailer for The Accountant (above this post) features Kaveh Cohen & Micheal Nielsen’s (Ninja Tracks) track ‘Taste’ as well as Radiohead’s ‘Everything in Its Right Place’ . You can find out more about it in our Trailer Music Placements July 2016 recap.

1 Comment on "Out today: Mark Isham’s score for ‘The Accountant’ based on incorporated mathematical equations"

Just saw The Accountant with Mark Isham score. Am I the only one who hears he ripped 95% of the primary theme from “Tranquillisimo” by H. Gorecki???