West One Music Group’s Heroville album is one of these very rare albums that transport you into another world with the very first notes. I was fortunate to speak with Multi-award winning, BAFTA and IVOR NOVELLO nominated composer Richard Jacques about the wonderful mix of orchestral and big band elements that blend beautifully into each other in every cue.

For a start, please have a listen to the highly enjoyable ‘Heroville’, composed, orchestrated and conducted by Richard Jacques, and let me walk you through the tracklist inviting you to this miraculous town called Heroville.

Starting off in a world where life appears to be just wonderful, you get welcomed to Heroville with an energetic big band marching trough the town. Then suddenly you realise you are surrounded by superheroes trying to save this glorious world from a danger you do not quite understand yet. While you look around, you discover an abandoned lair where something extraordinary seems to be hidden. But after a long day in this strange place that is Heroville, you have become quite sleepy and you fall into your cosy bed.

When you get up in the morning, something has changed though. Some mystery is definitely hidden in the morning fog and not too long until various peculiar things start to happen. While you are trying to figure out what is going on, there is already trouble brewing as good old Mr. Mischief is preparing some new shenanigans in his cabinet. As it turns out you stumbled into his lair yesterday!

Luckily this is just like any other day in Heroville and so your friendly neighbourhood superheroes solve this problem within minutes by exchanging the ingredients in his explosive vessel with colourful soap bubbles. You still do realise that the superheroes in Heroville got a bit lazy and so they expected they could solve it once and for all in a day’s work – but not with Mr. Mieschief: During the night, he climbs out onto his rooftop! In contrast to yourself, our favourite superheroes were not born yesterday though and so they all start dashing above the heads of Heroville’s sleeping population.

Of course they catch Mr. Mischief even before sunrise and the following morning you get up early after only having heard a few rumblings here and there from above which did not really wake you up. The reason why you get up early today is the same as why you came to Heroville without knowing: Your wonderful Ms. or Mr. Perfect – in Heroville genders do not matter – is waiting for you at the little chapel and so you hurry up to get dressed in her favourite suit of yours, to then arrive just on time to kiss your bridyspouse.

You live through an especially wonderful day in Heroville together before your better half has to go on a longer journey visiting her sick grandparents. But you do not ever say goodbye as every farewell is just a temporary deferment of a new beginning; and you know already: The future with will be all marvelous! And so while you keep waiting for the love of your life, you already start preparing the welcoming party and life is good again.

How the concept for Heroville was created

Just as good is life for composers when they can get their music recorded at places like Abbey Road. Hence, it is no wonder that Heroville shines as it does considering that brass and strings were all recorded here. In 2001 Richard Jacques’ score for Headhunter was the first video game score to be recorded at Abbey Road and ever since he has frequented the studios whenever possible for projects like James Bond 007: Blood Stone or for LittleBigPlanet 2’s The Muppets Premium Level Kit. 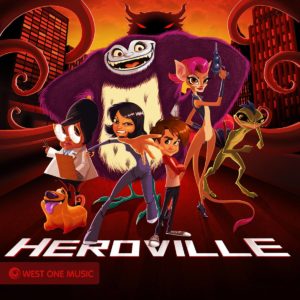 The latter project was all done with a big band and while he has written in many different styles already, Richard Jaques’ pointed out how great it was that the team of West One Music Group including album producer Chris Brown knew his style and previous works so well that they played specifically to Richard’s strengths. Also, he “was very fortunate to have a lot of freedom. Once we had worked out the kind of styles and emotions that we’would create, I had a complete free run to do my thing.”

About the beginning stages of the project, Richard Jaques’ mentioned that “we wanted to create an album that was in a way the perfect soundtrack to an animated feature film and so we were inspired by a lot of the animated movies. Instead of just a regular library music album, we wanted to give it a story arc. In Heroville we have got chase music, we have got suspense and tension, love and romance – all these different aspects which you would normally expect from an animated feature film. We actually worked out the various tracks that we wanted to compose and then we found that this gave us a story arc.”

When speaking about some of the Disney and Pixar movies that inspired the album, Richard Jacques pointed out how “a lot of those movies do use a big band and orchestra. Although some people may not like jazz or big band music they may appreciate the music when they are watching something like this because a big band would provide that kind of happy feel-good feeling for an animated feature film.”

How Heroville came to life

The next steps once the composition was done, were then the recording sessions: 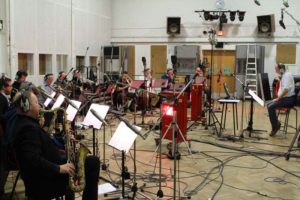 “In the morning we recorded a big band in Studio Two, The Beatles Studio, which was fantastic. Then in the afternoon we had the orchestra: The brass are very important for this kind of album. I’m actually a trombone player originally so I know all the brass players very well and recording in London has a very specific brass sound because many of the brass players play on movie scores, in orchestras, they play jazz and they play in musicals in the West End. So it’s a very good experience to work with these musicians who are incredibly talented; they give it a certain sound. I think when I was doing James Bond: Blood Stone and The Muppets, they gave my music a sort of signature sound, which I again wanted to create. At Abbey Road we had big band brass (saxophones, trumpets, trombones) and then we also had french horns, trumpets and trombones for the more orchestral tracks. It was a wonderful opportunity to work at Abbey Road again at Studio Two and work with the musicians.”

On a side note Richard Jacques mentioned that on this particular project he decided to conduct some of the sessions himself because West One Music Group’s Chris Brown took care of the production in the booth. Yet, he also likes to produce: “I don’t have any preference, I enjoy doing both.”

Below you can watch a snippet from the recordings for ‘Heroville’ (featuring ‘All In A Days Work’):

Coming to an end of this glimpse into the musical world of Heroville, let us get one final step deeper by looking at the instrumentation and how it influenced the overall sound of some of the pieces:

“Saving the World is a classic heroic piece of music. The trumpets and the trombones really take that to the next level. Whereas in tracks like Life is Wonderful, you’ve got this really nice big band sound with the saxophones who give it that fun element. And then in a track like Rooftop Dash, the strings are going crazy as if someone is running fast across the rooftops. The flute in tracks number 5, 6, 7 and 8 gives a very mysterious quality, so that is where you will hear a lot of the intrigue and tension. The instruments definitely have a role and I use them in different ways in different settings playing to their strengths, tone, colour and sound.” If you would like to listen to some of Richard Jacques’ favourite cues from the album, then these would be All in a Day’s Work, Rooftop Dash, Love is Wonderful and Life is Good again.

I hope you enjoyed this little journey through the alleys of Heroville. You can find out more about Richard Jacques on his official website, stream Heroville via Spotify or purchase it via iTunes. For licensing info please contact West One Music Group. Richard Jacques also mentioned several tips for young composers which you can find in our related article.

About West One Music Group:
West One Music Group is a global music agency that partners with talented composers to create authentic, live-recorded music for leading brands and media companies. Founded in 2002, West One Music Group offers a curated catalog and a simple licensing process, while ensuring fair compensation for its community of award-winning artists. West One Music Group prides itself on being a family, focusing on maintaining quality, integrity and authenticity in every project. The company is based in London, with offices in Los Angeles and New York City.