The result of a concert performed by Jean-Michel Bernard celebrating the music of legendary composer Lalo Schifrin at the 2016 La Baule Film Music Festival in France, Varèse Sarabande will release a new studio recording of JEAN-MICHEL BERNARD PLAYS LALO SCHIFRIN digitally and on CD October 6, 2017 (purchase here). The album features three piano duets performed by Bernard with Schifrin himself!

In addition to this wonderful release, Varèse Sarabande, together with Musicians at Play and Music Fund Los Angeles, will be celebrating the 85th birthday of Schifrin with a special concert on October 7th in Los Angeles, at the historic Alex Theatre in Glendale (concert details).

Lalo Schifrin calls Jean-Michel Bernard his ‘soul brother.’ The two first met over 25 years ago, but it wasn’t until they were reacquainted in 2016 that they would strike up a musical friendship.  Schifrin was the guest of honor at the 2016 La Baule Film Music Festival.  Bernard was asked to give a tribute concert to celebrate the Maestro, and re-orchestrated Lalo’s themes for the performance.  Though not originally scheduled to – Bernard invited Lalo to join him on stage and the two played 35 minutes of amazing improvisations, culminating in Schifrin’s beloved “Mission: Impossible”.

“After a Dirty Harry Blues duo with Pierre Boussaguet, he launched into a wild piano duel with Jean-Michel on Happy Birthday—it really was Boussaguet’s birthday—before ending on a white-hot reprise of Mission: Impossible… thirty-five minutes later!” described the French journalist Stéphane Lerouge. “The audience, fully aware that they had witnessed a historic happening, gave them a standing ovation that stopped the clock.”

Inspired by the music of Schifrin and determined to recreate the historic moment by recording his arrangements for this album, Jean-Michel began recording this album – featuring Lalo’s beloved music from Mannix, Cool Hand Luke, Bullitt, The Cincinnati Kid, The Cat, the Dirty Harry Suite (featuring composer – and Clint’s son – Kyle Eastwood on electric bass), plus a melodic trip to Lalo’s roots with pieces like Lalo’s Bossa Nova and Tango Del Atardecer. After an initial recording session in France, Lalo invited Jean-Michel to Los Angeles to record a series of duets at the legendary Capitol Studios where Lalo would join him for three pieces.

“Jean-Michel reserved two pieces for him [Lalo], each for two pianos: Chano (originally written for Gillespie), and a lengthy introduction to The Plot, like some fantasy joust nourished on jubilant quotes,” wrote Lerouge. “He also built up an original suite combining Recuerdos from Che! (with a baguala rhythm) and the love theme from The Four Musketeers in Renaissance style, forming a made-to-measure piece for Sara Andon, a stunning New World classical flautist. These three piano duets, performed by Lalo and Jean-Michel, can be heard on this album: Introduction to The Plot, Chano, and The Cheketeers Suite.”

Take a musical adventure with this delightful new recording JEAN-MICHEL BERNARD PLAYS LALO SCHIFRIN.  Perhaps Schifrin himself summed it up best, “In La Baule, it was a magnificent child. From now on, it’s an adult.” 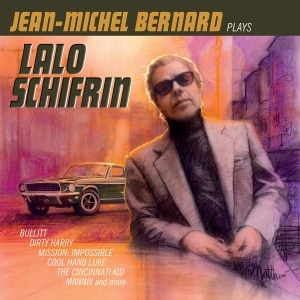 A new studio recording of Jean-Michel Bernard plays Lalo Schifrin will be be available digitally and on CD October 6, 2017.

Jean-Michel Bernard began playing the piano at the age of two. When he was 14, he was awarded first place at the Bordeaux Conservatory and later graduated from the Paris ‘Ecole Normale de Musique’. At 19, he recorded with the London Royal Philharmonic Orchestra, whilst pursuing a career as a jazz musician and performing with prominent jazz artists including Wild Bill Davis, Jimmy Woode (Duke Ellington’s bassist) and Eddie Davis.

From 1987 to 1991 he worked as musical director and conductor of the successful radio show “L’Oreille en Coin” on National Pubic Radio France Inter. Between 2000 and 2003, he performed with the Ray Charles Quartet on the European and Australian tours as organist and conductor, “this guy is a genius, he is extraordinary” Ray used to say concerning Jean-Michel Bernard. He also scored many documentaries and commercials during the 90’s.  His career as a composer began with animated films, followed by collaborations with masters such as Lalo Schifrin and Ennio Morricone.

He frequently works with director Michel Gondry and has composed songs and scores for films including Human Nature and The Science of Sleep, which screened at the Sundance and Berlin Film Festivals. He was nominated for the World Soundtrack Awards in 2007 as Discovery of the Year and won the France Musique/UCMF award at the Cannes Film Festival the same year.

In 2008 he scored the music for Michel Gondry’s Be Kind Rewind, Cash by Eric Besnard, and A Pain in the Ass by Francis Veber. The same day Be Kind Rewind was shown at the Sundance Festival, Jean-Michel Bernard performed alongside rapper/singer Mos Def and Gondry, an avid drummer.

The following year, the Cannes Film Festival invited him to represent France in the film music concert program. He also received an award for his achievement outside of his native country from the European Union of Film Music Composers (UCMF) and was appointed as sound designer for both HBO’s channel and website.

He has collaborated with French actress and director Fanny Ardant on two of her films Chimères Absentes and Cadences Obstinées starring Gerard Depardieu and worked on Academy Award winning Hugo by Martin Scorsese. He scored the music of Love Punch by Joel Hopkins starring Pierce Brosnan and Emma Thompson, Love at First Child by Anne Giafferi and Money by Georgian director Gela Babluani. Bernard has conducted master classes at the Cannes Film Festival as well as in Montreal, Angers, La Rochelle, Krakow, Cologne and in Aubagne, where he performed a live version of “Jazz For Dogs”, an album co-created with Kimiko Ono and featuring a number of prestigious guests including Fanny Ardant, Francis Lai and Laurent Korcia.

In 2014, Jean-Michel Bernard began teaching film music classes at the Paris Conservatory and was guest of honor with Michael Giacchino at the Audi Talent Awards in Paris with the Paris Symphonic Orchestra, at Braunschweig Festival and at Soundtrack Cologne Festival.

He scored “Terra”, a contemporary dance project which premiered at the Coronet in London in March 2016 and participated as composer, arranger and performer on The Avalanches long-awaited second album Wildflower.
His most recent project is an album celebrating the legendary Lalo Schifrin entitled Jean-Michel Bernard plays Lalo Schifrin which includes 3 piano duets with the master himself. The album will be released in 2017 with concerts in Los Angeles, Paris, and Japan, at the Tokyo Blue Note Jazz Festival.

“To me it is amazing that I found a real ‘soul brother’ in the sum of his expressions (composing, conducting, performing, etc.). I cannot find words to reflect my admiration for his genius, a real miracle because he is my double.” (Lalo Schifrin).

Lalo Schifrin is a true Renaissance man. As a pianist, composer and conductor, he is equally at home conducting a symphony orchestra, performing at an international jazz festival, scoring a film or television show, or creating works for the Los Angeles Chamber Orchestra, the London Philharmonic and even The Sultan of Oman.

As a young man in his native Argentina, Lalo Schifrin received classical training in music, and also studied law. He came from a musical family, and his father, Luis Schifrin, was the concertmaster of the Philharmonic Orchestra of Buenos Aires at the Teatro Colon. Lalo Schifrin continued his formal music education at the Paris Conservatory during the early 1950’s. Simultaneously, he became a professional jazz pianist, composer and arranger, playing and recording in Europe.

When Schifrin returned to Buenos Aires in the mid 1950’s, he formed his own big concert band. It was during a performance of this band that Dizzy Gillespie heard Schifrin play and asked him to become his pianist and arranger. In 1958, Schifrin moved to the United States and thus began a remarkable career.

His music is a synthesis of traditional and twentieth-century techniques, and his early love for jazz and rhythm are strong attributes of his style. “Invocations,” “Concerto for Double Bass,” “Piano Concertos No. 1 and No. 2,” “Pulsations,” “Tropicos,” “La Nouvelle Orleans,” and “Resonances” are examples of this tendency to juxtapose universal thoughts with a kind of elaborated primitivism. In the classical composition field, Schifrin has more than 60 works.

To date, Lalo Schifrin has written over 100 film and television scores including Mission Impossible, Mannix, Cool Hand Luke, Bullitt, The Cincinnati Kid, Amityville Horror, four of the Dirty Harry films, and more recently Abominable and the Rush Hour trilogy.  Lalo Schifrin has now won five Grammys® (twenty-two nominations), one Cable ACE Award, and six Academy Award® nominations (for Cool Hand Luke, The Fox, Voyage of the Damned, The Amityville Horror, The Competition, and The Sting II).  His longtime involvement in both the jazz and symphonic worlds came together in 1993 as pianist and conductor for his on-going series of “Jazz Meets the Symphony” recordings.

Founded in 1978, Varèse Sarabande is the most prolific producer of film music in the world, releasing the highest quality soundtracks from the world’s greatest composers. From current box office hits and top television series to the classics of Hollywood’s Golden Age, Varèse Sarabande’s catalog includes albums from practically every composer in every era, covering all of film history; from Bernard Herrmann, Alex North and Jerry Goldsmith to Alexandre Desplat, Michael Giacchino, and Brian Tyler.